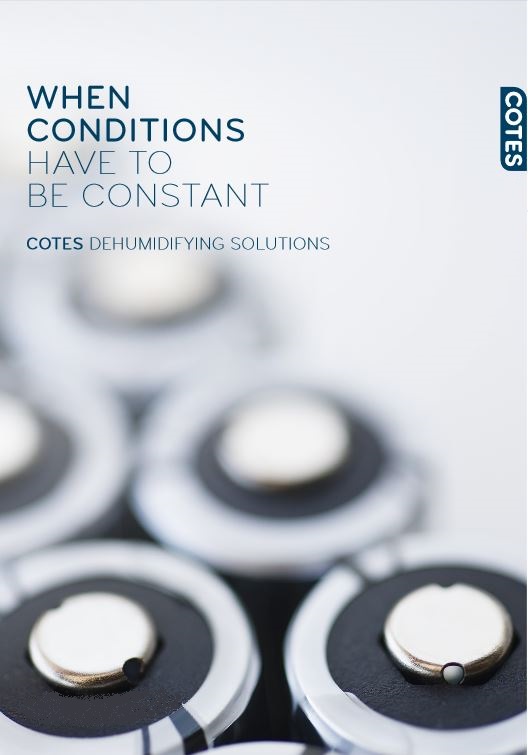 WHEN CONDITIONS HAVE TO BE CONSTANT
Humidity management is a prerequisite for peak performance in lithium-ion battery development
Technology for next-generation lithium-ion batteries
From its base in the United Kingdom, Nexeon Ltd. is working to bring groundbreaking silicon anodes to market for use in the next generation of lithium-ion batteries. Nexeon® has patented a new way of structuring and etching silicon for use in the anodes of such batteries, resulting in extended cycle life and a significant increase in battery capacity.
Compared with conventional carbon anodes, Nexeon silicon anode materials – featuring a unique sub-micron pillar structure – have a much higher capacity for lithium, resulting in almost ten times the energy capacity per gram. In addition, Nexeon technology reduces the amount of material used in lithium-ion batteries – a big advantage for manufacturers of technical products and consumer goods.
Tests have shown that Nexeon silicon anode materials achieve such results at lower cost than graphite for a given capacity, and that the technology has substantial commercial potential compared with silicon nano-fibres, ribbons or tubes. And it doesn’t require any significant changes to existing manufacturing processes.
Producing capability
Nexeon is an advanced-technology company set up in 2005 on the basis of research at Imperial College, London. Nexeon has already filed numerous worldwide patent families, including patents on high-aspect ratio silicon materials and on the use of such materials in lithium-ion batteries.
In 2009, the company made use of new investment funding to set up a fully automated pilot plant for the production of silicon anodes at Milton Park in Oxfordshire. This plant is based around a manufacturing clean room delivered by Scientific Climate Systems Ltd. This is fitted with humidity management equipment supplied by Cotes, in the form of a CRP40000 adsorption dehumidification system configured to process no less than 13,000 cubic metres of air per hour.
Moisture control is vital
The Nexeon pilot plant is configured to represent a commercial-scale manufacturing facility, paving the way to better understanding of the processes and costs involved in producing groundbreaking silicon anode materials.
The clean room is pivotal to this capability. In environments associated with lithium-ion battery development and production, it is essential that the levels of moisture in the air are kept as low as possible, because moisture greatly reduces the performance of the electrolyte.

A challenging start
The clean room and the Cotes CRP40000 dehumidifier unit at its heart were commissioned in the summer of 2010. The weather meant that the running-in process coincided with torrential down-pours. The outdoors installation was fully exposed to these inclement conditions, but met or exceeded all the specifications when started up, and achieved a dew point as low as -74.5°C – an exceptionally low figure.
Pleased with the performance
According to Nexeon’s Engineering and Operations Director Ian Mc-Donald, one of the biggest challenges for the humidity management set-up systems from the moisture introduced by people’s bodies. Because Nexeon’s R&D activities are at the forefront of current technology, they are the subject of worldwide interest. Unlike in a conventional manufacturing clean room, the moisture from the bodies of the many and frequent visitors has a relatively big effect on the very low humidity levels in the facility.
Ian McDonald reports that Nexeon is pleased with the way the Cotes CRP40000 adsorption dehumidifier maintains the required operating point, and quickly returns humidity levels to the desired -60°C. This makes it possible to minimize any fluctuations in the levels of moisture in the air after visitors have left.
Reliability essential

The Cotes CRP40000 dehumidifier is fitted with a specially configured indirect gas-fired regeneration air heater to dry the air, and because of the exceptional specifications at this facility an unusually large proportion of the dried air is recycled. The only air drawn in from outside is the small volume needed to maintain the over-pressure essential in such a clean room facility.
It is also important that Nexeon is able to rely on the Cotes de - humidification system linked to the clean room. “It would be cata - strophic for us if it were out of operation for any prolonged period. We simply wouldn’t be able to make any cells at all,” notes Ian McDonald.
Nexeon has had previous experience of dehumidifiers and has noted that the new Cotes system with modern controls clearly provides greater stability as well as lower energy consumption.

Energy advantage
The traditional approach to large-capacity dehumidification systems is simply to overspecify components. This means such units are often operating at the extremes of their performance range, and are therefore relatively inefficient.
According to Cotes engineers, the design of this large-capacity unit focused on optimizing the equipment to meet the company’s specific needs, and ensuring the best design with the lowest possible energy consumption. This makes the installation exceptionally energy-efficient, at the same time as giving the company maximum control over operating parameters for the clean room. This is a big advantage when dealing with changing requirements.
The specially configured Cotes control systems give Nexeon considerable flexibility. The company can reduce the dew point from the design figure of -60°C to -30°C (or higher) to meet different requirements, to reduce both dehumidification effects and energy consumption during times with less activity or lower manning levels, such as nights and weekends. All such operations can be done either manually or automatically, paving the way to even greater energy savings in the future, without affecting dehumidification performance.
Another energy-optimization feature lies in the pre-cooling system. This helps avoid extra energy consumption caused by temperature fluctuations and other variations in operating conditions.
Stainless steel advantage
The Cotes dehumidifier unit is mounted outside the building, exposed to the weather. Ian McDonald pointed out that the robust construction of the Cotes installation – with the exterior cabinet made of corrosion-resistant AISI 304 stainless steel – was therefore a big advantage.